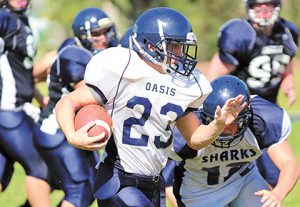 MICHAEL PISTELLA Senior Greg Krempski (23) runs to daylight as Oasis prepares to open its season Sept. 4 at Geneva. More photos are available online at: cu.cape-coral-daily-breeze.com under Latest Galleries in the Scholastic Sports folder.

With a new head coach and some 8-man football experience under their belt, the Oasis Sharks hope to make a trip to the playoffs this year.

It was after the Sharks began practicing this month that Mick Ware found out he was the new head coach. He had been with Oasis for five years as an assistant and was promoted to the head job when James Magas could not commit to another year of coaching.

Ware made his way to Southwest Florida from Akron, Ohio, with a stop at Sebring. He has been coaching for about 32 years, mostly working with younger players. He had a three-year stint as head coach of two Southwest Florida semi-pro teams. This is his first high school head coaching position.

“He knows the kids really well from weight training,” Oasis athletic director Brian Montag said. “So the transition was not that hard.”

Oasis has been through transition before, and not just with their head coaches. The Sharks will play in the Florida Christian Association of Private and Parochial Schools (FCAPPS) league for the second year in a row. The Sharks previously were in FCAPPS for a number of years when it was 7-man football. They moved up to the FHSAA 11-man game in 2012, but found themselves overmatched by bigger schools.

“We were getting beat by an average of about 40 points per game, and our kids were getting discouraged,” Montag said. “So it was good when our principal, coach, and I all came up with the idea of returning to the 8-man game at the same time.”

The Sharks played FCAPPS last year and posted a 5-5 record. They were on the brink of making the playoffs, but lost by two points in their final regular season game.

In FCAPPS, the top four teams from each of two divisions make the playoffs. Most of 11-man football rules are the same in 8-man. Differences from 11-man include guards on the line, but no tackles, so the offensive line is three instead of five. There is also one less man in the backfield. That means four are eligible to catch a pass.

Ware takes over a team with several returning players, and at least one new face. Thirty tried out for the team, and, again, only 25 can suit up for any particular game.

Five players to watch for the Sharks include seniors Noah Houfek at running back, Jeff Meyers at quarterback, and Austin Smith at nose guard. Sophomores Quinn Ferrino and Micel Kola play wide receiver and fullback, respectively.

Houfek has speed, being a top sprinter in this spring’s state track and field meet. Ferrino is described as having great hands at receiver. Kola is the new face and comes to the Sharks from Michigan. These players will help Ware’s team be balanced.

“The 8-man game is much faster than the 11-man,” Ware said. “It’s all about passing. Most teams want to spread the field and throw, throw, throw. Last year we scored 84 points against Solid Rock, and still lost by two.”

With Kola at fullback, Ware wants to do more “ground and pound.”

“With his strength and size, he should be able to make some yardage,” Ware said.

The offensive line averages about 6-foot, 250 pounds, so that enhances the Sharks’ ground game.

The defense will line up in a 3-2-1-2 set – three down linemen, two linebackers, a safety, and two cornerbacks.

With these experienced and skilled players Ware hopes to improve enough to make the eight team playoff.

The Sharks kick off the season Sept. 4 on the road in Lakeland against Geneva Classical Academy. 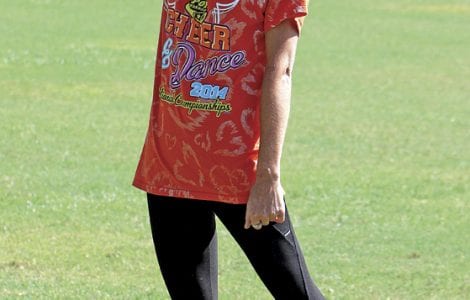