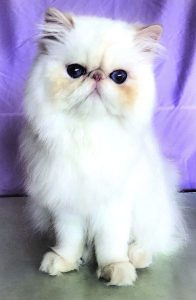 The “Feline Fiesta” CFA All Breed Championship and Household Pet Cat Show is ready for a purr-fect return to Fort Myers next weekend.

Tickets are $8 for adults, $5 for those 5 to 12 years old and children under 4 years old are free. There is a family four pack available for $20.

Cape Coral resident Barb Cole, a founding member of the Platinum Coast Cat Fanciers, said the club started about 25 years ago when a gentleman decided the area needed a club and a cat show.

“He felt this area had enough people interested in cats to support a cat club,” she said.

Co-Show Manager Patty Arnold, a Lehigh Acres resident, said returning this year is an agility course for the cats.

“In the dog world they have big fences and teeter totters for the dogs to run and jump. With the cats, they are within an enclosure and it’s like a mini course. They have tunnels, stairs. It’s on a smaller scale. You take your cat in there. Cats are very toy driven, so you stick a little toy in front of them and you lead them around and they go through the motions,” Arnold said. “It’s really cool. Some are really fast. Some have never done it before and you have to get them accumulated.”

“If I left my chair it was gone. They were lined up two rows deep to see the agility,” she said of it being apart of the show a few years ago. “That was a pretty popular item. It’s a lot of the things they like to do when they are playing.”

The show also will include a “Meet the Breeds” portion featuring approximately eight of the most popular breeds. Either the breeder, or someone knowledgeable about the breed, will provide a presentation.

“It depends on which exhibitors enter the show and which breeds we will have access to,” Arnold said. “We will do that at certain times of the day. It’s going to be educational and fun. It’s great for kids and anyone who loves cats.”

In addition to the all breed cat show, a household cat judging with nonpedigree status, will be among the festivities. Arnold said the king and queen will be crowned on Sunday.

Helping Paws Sanctuary owner Marnie Miszewski said every year the club allows rescues to come and bring their cats, not only to be there for adoption, but to participate in the household pet awards. She said it’s nice because typically whatever cat they show is adopted.

“They want to own a winner, even though every ring and every judge is subjective,” Miszewski said. “Your pet may get No. 1 in one ring and last place in the next because every judge has a different view of what makes them smile.”

Typically, the handful of cats that are brought to the show are chosen at the last minute because they may be adopted beforehand if chosen too early. The shelter currently has about 130 cats up for adoption, which is down from the typical 200 they have during the winter months.

“We have less in the summertime due to less volunteers and less money coming in when it’s off season. We base the numbers according to what we care for,” Miszewski said.

So far this year the Pine Island-based Helping Paws Sanctuary has had a great year in adoptions. Among its success stories is the adoption of three nine-year residents who found a family last month, all at the same home.

“We do adopt one, get one free. Our shelter does free boarding and free nail trims. If someone goes on vacation we babysit them. I love them so much. If someone brings them in I get to see them from time to time,” she said, adding that it’s a great way to stay in contact with the owners and see how the cats are doing.

A vast array of vendors will be present with cat products, supplies, food and toys during the cat show. Raffles also will be among the festivities.

A food truck featuring Mexican cuisine will also be among them.

Many of the Platinum Coast Cat Fanciers club members are also breeders who will show their cats.

Arnold, a breeder, said she became involved in 1999 when she began bringing her Ocicats.

“I joined our local Platinum Club. I got involved with them and met all the people that are involved today,” she said. “I have a co-breeder now and she is involved.”

Arnold said the Ocicat is a wonderful breed that is intelligent, inquisitive and loves to be with their people.

“They have to be involved in whatever you are doing. They are wonderful with children and other animals. They don’t know a stranger,” she said. “They don’t run and hide when the doorbell rings. The Ocicat, they are so dog like, they greet you at the door.”

“I breed to show and hopefully in the litter I will get what I am looking for. I’m trying to better the breed . . . robust health, and I want to continue the line and make it better.”

Cole, a cat lover, and breeder of Himalayan Persians, said she is showing a few of her cats this year, all under a year old. Getting her cats ready for the show is an ongoing process. Her Persians are washed and blown dry on a weekly basis to ensure there are no knots.

“It’s an ongoing process to keep them clean,” Cole said.

Cape Coral resident Tina Decker said she had shown cats forever in New Jersey before moving to South Carolina where there were no cat shows. When she moved to the area and saw that there was a cat show in Fort Myers she attended as she is a Siamese cat fan.

Decker said she never had any cats growing up, but thought the Siamese breed was very neat with the wedged head.

“They are so intelligent. They understand everything you say to them. They are an amazing breed. My Siamese are so smart and amazing. I tell them to do something and they do it,” she said.

Decker said the first Siamese she had understood the English language without any gestures. The male cat would come to the table at the cat shows at verbal command. He also worked the crowd by sitting on people’s laps.

“Unbelievable. He was the most intelligent one,” Decker said.

This year’s show she will show Ske, and Chewy, who is her household pet.

“I was blown away with what goes on to put on a cat show. Last year we spent 14 to 15 hours pressing ribbons and putting them together. My husband and I both said ‘If this comes together this will be a miracle.’ This year I am more involved with the vendors. It’s an amazing feat to put on this show. You go into an empty hall and in four hours the room transforms into an amazing event,” Decker said.

Cape Coral resident Diane Alexy just moved to the area in late May and met Charlene Campbell through a contractor recommendation.

“She’s amazing with rescues that she does. She adores cats. She really does,” she said.

Although she and her husband Bruce are new to the area, they have been breeding cats for 30 years, one of which is Siamese.

“I am one of those people that said no I’m not a cat person. I’m a dog person. My mother and dad did not like cats. The only attempt were two barn cats. They were feral. As an adult, a friend of mine who lived out in the country adopted any cat that wanted to be adopted,” Alexy said. “One was a Siamese that she got from the animal shelter. She took the mother and then the other cats hated that cat. She talked me into adopting Sasha. These are not like other cats. They are really different and they are special. Sasha taught me about very close relationships. Siamese love their people. They consider their people their family for sure.”

Alexy, who breeds Siamese, said what she has found about the breed is they want their people first.

“The relationship they have with us is amazing. I love how they love their family, it means a lot to me,” she said.

“It’s very unusual to show an older Siamese. Their color doesn’t hold. They are better as teenagers,” she said. “She likes to show. She looks great for her age. She likes to greet the crowd, too. The spectators like her. They are really curious about an older cat. She represents the breed very well.”

The Platinum Coast Cat Fanciers Club is one of companionship among all of its members for their common thread of interest — cats — as well love of the annual show.

Alexy said Linda Alexander was the first person who talked her into joining the club and becoming active with the cat show.

“It becomes like a family. Cat lovers just love each other. We have that in common. We have fun sharing our experiences,” she said.

Cole said she really enjoys the annual cat show because everyone wants to talk about cats for the day.

“Where can you go to talk to somebody that is excited about cats for two straight days?” she asked. “It’s good wholesome fun for the whole family. Kids love to come to the show and see all the different breeds . . . short hair and long hair, solid colors and spots.”

Decker explained that in the club she finds that everyone is so friendly.

“They can’t do enough for each other. We have a common bond. We are all into loving cats. It’s been a wonderful experience and the club is fabulous,” she said.