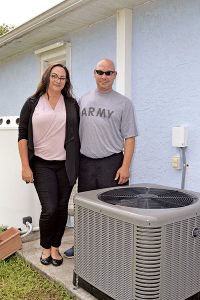 A U.S. Army veteran and Cape Coral resident is getting a reprieve from the heat thanks to charitable donations from businesses in the community and an organization that has a long history of serving military members.

Aaron Brown, a former U.S. Army combat medic, has been having issues with his air conditioning system at home, making conditions unbearable for his family that includes his soon-to-be wife and two young daughters, ages 7 and 8.

“It’s unbelievable,” Brown said. “I couldn’t believe it. I was speechless. I didn’t know what to say.”

Brown was living with the original air conditioning unit installed in his 15-year-old home that was on its last legs.

The battered unit was hardly keeping his home cool, and even emitted a less-than-pleasant aroma due to the prior home owners being smokers.

“You know, it would be hot,” Brown said matter-of-factly. “We tried to keep it as cool as possible — it would be hard.”

Brown said they would have to turn the unit off during the day in fear of it failing completely and would come home to a sweltering living environment day after day in brutal Southwest Florida weather. The family would then have to wait for their dysfunctional unit to kick into gear.

To make matters more pressing, the pool in their backyard went kaput as well.

Bunch, as well as contributions from the A/C company doing the work — Cool Air Pros out of Fort Myers, Tropic Supply and Nu-Calgon — all pitched in to help this combat veteran and his family.

Brown served from 2010-2014 where he was stationed in Alaska before doing a year-long tour in Afghanistan.

“It was rough,” Brown said. “Everything that you hear on the news is real, but, times 10 when you’re actually there and seeing it in person.”

“When I became aware of this veteran’s plight, I proposed the idea to our Board of Directors for approval,” said Bunch. “They asked me about going out of our mission statement and did I think it was a good idea.”

Their mission statement is usually centered around active duty military.

Bunch did think it was a good idea, and said, “Yes. If those reading about or learning of OOA’s decision to help a combat veteran and his family want to stone one of us at the town square, I’ll ask for no blindfold.

“It is simply not in my DNA to say ‘That’s not our department. Have you checked with other organizations who help veterans?’ My style is to take a look at the critical situation that stands before me and make an informed decision based on the results of our vetting process.”

Bunch said that while installing new HVAC systems is not an arena he is looking to continue in, he could not stand by and watch Brown and his family — especially his two young girls — suffer.

Just before OOA learned of Brown and his family, the organization may have received some foreshadowing in the disguise of a donation.

“A church sent OOA a check far in excess of our average donation of $18. OOA was directed to specifically earmark these funds to a worthy veteran,” said Bunch. “OOA did exactly as instructed. We did not pay one penny less or one penny more than the stated amount on the check. It was truly a gift from above for a family in need. You might say the sun, moon, and stars all lined up for them. In other words, this miracle cannot be adequately explained.”

Capt. Giddy Up also noted that he did reach out to two other major veteran organizations to help chip in with the costs, but they did not oblige.

“So, we decided to do it ourselves,” Bunch said.

Joey Postel, one of three owners at Cool Air Pros, said upon meeting Brown, he couldn’t shake the feeling that he needed to help.

“It kept eating at me,” Postel said. “I am a Christian. Sometimes, you’ve got to give a hand-up, not a hand-out,” Postel said. “Outside of God and my family, my country is most important to me, and that includes the people who serve.”

The new unit came courtesy of Tropic Supply, with Nu-Calgon donating a brand new air purifier to help with the past owners’ habit. Operation Open Arms covered anything that was not donated.

Postel said the unit and installation would normally run around $6,000-7,000.

Maybe the most amazing part of this story is how quickly OOA, along with the local businesses, got this done for Brown.

“It just blew my mind how everything came all together at once so fast, and how all the intricate pieces fell into place,” Brown said.

“As a company, we really wanted to do this,” added Postel. “Aaron and Jessica are really hard workers. We wanted to help them on a personal level.”

OOA has been recognized nationally for its philanthropical work, offering active duty military personnel fishing trips, vacations, weddings and other services including same day PTSD counseling. Since the organization’s inception in 2005, OOA has awarded 4,004 U.S. service men and women $18.5 million in tangible benefits.