Way back then, as compared today, there were few residences, few businesses, few “finished” streets and vacant lots as far as the eye could see.

Much has changed in the last 45 years, though, and Cape Coral has become a thriving, expansive city. Many of the issues from 1970 do still exist today – how to deal with continuing development, infrastructure updates and improvements, up and down economic struggles and even paying for all the that need to be done. Through it all the city continues to and grow and change for the better.

Today, as we celebrate the city’s 45th anniversary, The Breeze is looking back at how this community was born, what happened in the early years after incorporation and in the following years. Also featured are conversations with some of the early pioneers, including a few “Cape kids” – people who grew up here during those formative years.

One other item included in this look back is a feature on the Cape Coral Breeze, your city’s newspaper, which happens to also celebrating a milestone in 2015. Forty years ago this month the community newspaper moved into its current location on Del Prado Boulevard.

What’s in this special anniversary section:

* Cape Coral’s mayors and councilmembers through the years 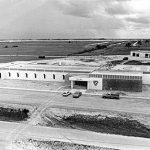 (Editor's note: The following items were taken directly from the headlines published in The Cape Coral Breeze from ...