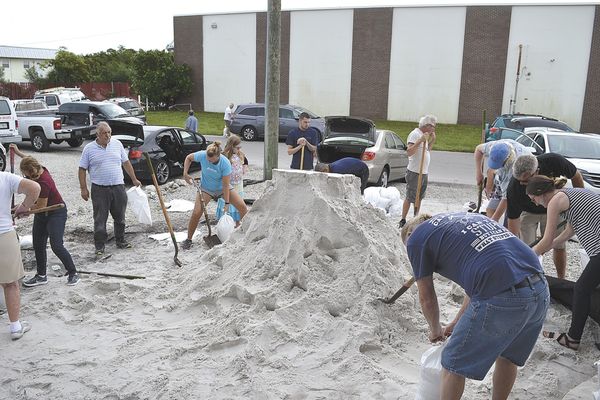 The town and the Fort Myers Beach Fire District teamed up to have sand dumped behind Town Hall for residents and businesses to protect their homes before Hurricane Irma made landfall. FILE PHOTO

It’s that time of year again when Southwest Florida residents should start checking their supplies to ensure they are prepared for this hurricane season.

Executive Assistant Chief of Life Safety/Support Ron Martin said it is very important to be prepared, especially since Fort Myers Beach is a coastal community. With wind, rain and storm surge, it is important that people take time prior to the start of hurricane season to start preparing.

“From our vantage point, people need to keep in mind to be prepared to be self-sufficient for at least 72 hours after a major event, whether it’s a hurricane or tornado. Be prepared all the time, that is a good practice,” Martin said.

“We still modify as threat changes. Learn by preparing and not waiting for the last minute,” she said. 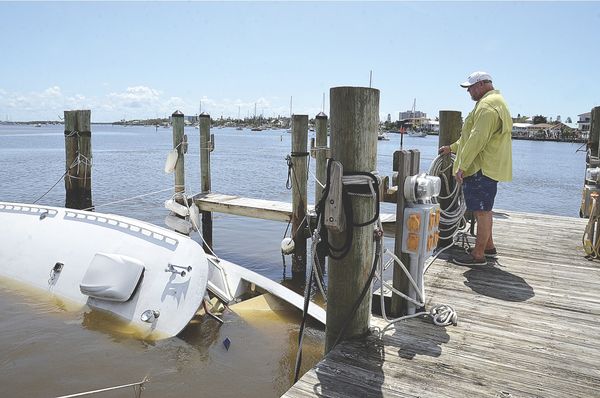 A boat that rolled into the water during Hurricane Irma at a Fort Myers Beach marina. FILE PHOTO

One of the many things to keep in mind is having a hurricane plan for you and your family, Martin said. That includes where are you going to go, a sheltering plan.

Are you going to stay local, or go out of the state, or area?

“Communicate that plan to loved ones,” he said.

A hurricane plan should also include pets, which means pet-owners should be aware of which shelters are pet friendly. Pets need to be up-to-date on their shots to go to the shelters.

If a shelter is a part of a plan, individuals need to bring their supplies with them and have a plan of what goes into the shelter and what will be stored in the vehicle. 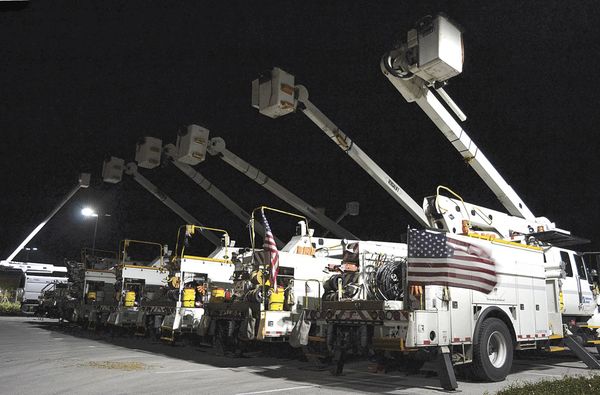 Delmarva Power out of Delaware staged its trucks near Fort Myers Beach to restore power after Hurricane Irma. FILE PHOTO

It is important to remember to give yourself enough time to evacuate if you are in a potential mandatory evacuation zone.

“You don’t want to be caught in your car during the middle of the hurricane. You want to be there, settled in and sheltered when a storm rolls ashore,” Martin said. “Be prepared for a major event, especially living in a coastal community as Lee County.”

A gallon of drinking water per person, per day, is also recommended to have on hand, as well as enough food, non-perishable food, for a three-day supply.

Prescription medication should also be considered when making a hurricane plan. Martin said if a major storm comes through, a pharmacy might be affected, which is why individuals should get medications filled prior to the storm.

Martin advises people to also have cash on hand before a storm because ATMs may be affected if a storm makes landfall.

The protection of vital documents is also recommended in some type of water proof container. Martin said it is important to protect irreplaceable valuables, such as insurance, birth certificates and Social Security cards. By placing these items in a specific container, they will be readily available after the storm.

The protection of a home is also important.

Get the shutters up early as the storm approaches and take them down as soon as the threat passes, Campbell said, adding it is important to not wait until the last minute.

“If you need help, reach out,” she said.

Shutters should not remain up year round to block the sun, Campbell said.

“We can’t get through those. You are increasing your rescue time in an upwards of 10 to 15 minutes,” she said.

Martin said they have to cut through the shutters and move them to get into a home.

“You are taking away all the openings of the house except for one,” he said. “It can dramatically intensify the fire.”

Martin said one of the biggest things is to maintain good situational awareness when under a threat of a storm. Listen to elected officials and emergency management when they issue watches and warnings.

“Understand that the emergency management authorities are doing that for a reason. Storm conditions could deteriorate to a point that a mandatory evacuation is warranted,” Martin said.

With that said, individuals should keep in mind that when it is no longer safe for first responders to be on the road when wind speeds hit a certain sustained wind per hour, those who decided to remain will not receive help until the conditions become safe to start responding again.

“During the hurricane there is a point that it is no longer feasible, or safe, for responders to get to you. It is imperative that you heed the warning and shelter accordingly,” Martin said.

Generator operation is also something individuals need to think about before and after a storm. Gasoline powered devices need to be placed at least 10 feet away from a structure to eliminate exhaust from coming into a structure. Generators should not be placed under over hangers, near windows, or doors.

“If you are planning on powering a house with a generator, it needs to be checked by a licensed electrician prior to doing it,” Martin said. “We don’t want people out there messing around with the main electrical panel, or main feed coming into the house. That needs to be done by licensed professionals. If you use a generator know how you are going to get power to your home and size your generator appropriately.”

Martin said every storm provides them with an opportunity for enhancements, as well as providing valuable lessons learned.

A boat that rolled into the water during Hurricane Irma at a Fort Myers Beach marina. FILE PHOTO

Delmarva Power out of Delaware staged its trucks near Fort Myers Beach to restore power after Hurricane Irma. FILE PHOTO

As hurricane season is officially underway, Lee County is again spreading the message of preparedness to its ...

The hurricane season officially started on June 1 and runs until Nov. 30. The American Red Cross urges people to ...