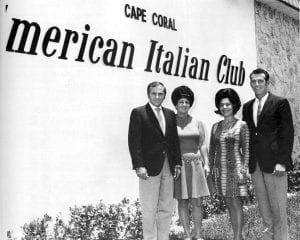 Many people and organizations had a hand in forming Cape Coral.

In December 1961, Robert H. Finkernagel Jr., came to the Cape. He was the managing director for Gulf American Land Corp. He was the manager of the Gainesville Chamber of Commerce at the time, his daughter, Ann Duffala said. He left in 1971.

She, her mother and two younger siblings followed in June 1962 after their home was built.

“Given my father’s total immersion into the development of Cape Coral, my siblings and I enjoyed access to most of the ‘behind-the-scenes’ goings-on,” she remembers.

For example, during the filming of the Route 66 series here, she remembers coming home and finding Glenn Corbett having cocktails on the patio. She made $25 in the 1965 film “The Fat Spy” starring Jack E. Leonard, Phyllis Diller, Jayne Mansfield and Brian Donleavy, which opened and closed after three days.

But her favorite memory? “Having my wedding bouquet made up of roses from the Cape Coral Rose Gardens, freshly picked that morning.”

According to David Dodrill’s 1993 book, “Selling the Dream,” Duffala said, “Daddy’s chief function involved ‘cutting the umbilical cord between the developer, Gulf American, and the residents’ or helping the city grow primarily from a company town, to an independent community.

“As a result of his efforts, daddy was named in 2005 by the News-Press as one of Cape Coral’s most influential people, an honor bestowed on only three other people,” she said. “I like to think that one of his most consistent titles was that of ‘a founding director of …’ with too many organizations to elaborate upon that could fill in the blank.”

“He and my mother lived in Cape Coral in the same house until their deaths in l999 and 2006, respectively,” she said.

On Ann’s first day of school in homeroom, she met Dennis Duffala.

“On my first day of school in homeroom, I met a very attractive young man also from Cape Coral, who drove his own car to school. Dennis’ family was the third family in Cape Coral, and he’d attended junior high school in Fort Myers. I was somewhat shocked upon meeting him, as his name had already been given to me by my father during the year prior to my move as someone who ‘drove too fast,’ and I shouldn’t think about dating him.”

But they did and in August 1968 after he returned home a Marine Purple Heart recipient of the Vietnam War, they married. They left the area to attend college, but moved back to the Cape because Ann was pregnant and both sets of their parents and two sets of grandparents still lived in the Cape.

“We saw the Cape as a wonderful place to raise a family (ultimately two children) with such family support. I was a stay-at-home mother for five years.”

But she began a long practice as a license school psychologist and mental health counselor. During her career, she belonged to many psychological and mental-health organizations, holding numerous offices at both the regional and state levels. She served on several 20th Judicial Circuit Courts committees.

“At the community level, I was a founding member of the Pilot Club of Cape Coral, an international civic-social organization for professionals and executives.” The Pilot Club is just one of many civic organizations that have helped the Cape grow.

Meantime Dennis Duffala has his own take on which organizations helped not only the Cape grow, but many young men also.

Duffala served more than 27 years with the Lee County Sheriff’s Office in various capacities, but most prominently as a crime prevention officer. He was honored to speak to many of those organizations which helped keep the Cape safer.

His parents also were involved in civic organizations.

“When I was in high school I was in Key Club,” he said. He also was with deMolay, a junior Masonic organization.

But even though Ann’s mother helped found the Pilot Club, Dennis decided he wanted to join. At the time, it was an all-female organization.

“I jokingly said once I was going to become the first male member of the Pilot Club,” he said. And he did.

“Ann held every office in Pilot,” he said.

“Every service organization I spoke to wanted me to become a member,” but he didn’t have the time for all. Some had very specific requirements on the amount of time one had to dedicate to the organization and there weren’t enough hours in the day.

But he remembers one organization clearly.

In his mid-teens, several youths wanted to have a club to call their own.

“We decided after much thought: ‘A-gents.'” Their slogan was “A-gents are gents.” They did a lot of community-type things, helping elderly women cross the street, collect money at Halloween for UNICEF.

They even wore jackets with the group’s logo: a cocktail glass.

“It was a very early service club in the Cape,” he said. “It wasn’t a criminal gang, but a fun gang to belong to.”

Welcome to Cape Coral, one of the fastest growing cities in the country. With a population nearing 160,000, Cape ...

The city of Cape Coral operates under the city manager-council form of government. City council members are elected ...

In 1957 two brothers, Leonard and Jack Rosen, from Baltimore, Md., spent weeks looking over Southwest Florida for a ...