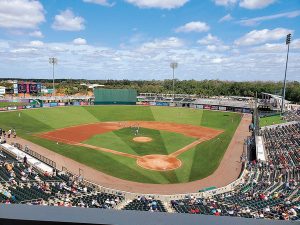 Hammond Stadium, the Spring Training home of the Minnesota Twins. By CJ HADDAD

It didn’t take the Red Sox bats long to get going on a beautiful spring day, as Boston outfielder Andrew Benintendi launched the second pitch he saw from Maeda into the right field seats to lead off the game.

Eovaldi came out throwing gas in the first for Boston — touching 100 on the radar gun and consistently living in the high 90s with his fastball. Twins slugger Nelson Cruz did hit a hard ground ball back at Eovaldi, who knocked it down with his foot, though he showed no signs of injury and retired the side without issue.

Maeda, who was acquired from the Dodgers for reliever Brusdar Graterol, outfielder Luke Raley and the 67th overall pick in the 2020 draft this off season, worked two innings in his spring debut, allowing one run on two hits, walking one and striking out one.

“I felt really good out there,” Eovaldi said of his outing. “I felt like I had really good command of my fastball — really everything other than my slider. Split felt probably the best out there.”

Eovaldi, who made just 12 starts and 23 overall appearances for Boston last season due to a right elbow issue, said he feels good about where he’s at heading into a new campaign.

“I feel like I’m coming in with a better idea — better approach, kind of picking up where I left off last year of what I was working on,” Eovaldi said. “I had a lot of time to work on it in the offseason and I knew exactly what I wanted to work on (coming into spring training).”

A solid first outing is always encouraging to see no matter the short innings of work. Eovaldi said he’s always felt good in spring, with this season being no exception. The radar gun certainly showed it.

“I usually feel pretty good in spring. I usually don’t have a hard time warming up or anything, but it’s definitely encouraging to see that it’s there,” Eovaldi said of his velocity. “I feel like that kind of makes it easier — anytime you get started off on a good note. I’ve been able to get a lot of dry work in between my starts and I feel like that’s really been helping out a lot.”

Eovaldi said he’s working to polish his split finger fastball as he gears up for the season and new skipper Ron Roenicke said the 30-year-old threw some good ones in his two innings.

“Fantastic,” said Roenicke when asked about Eovaldi’s outing. “That’s what we talk about when Nate has his command, it’s really tough to hit him. When he’s got that kind of command and he’s down in the zone with his off speed, he’s so tough to hit with the velocity that you always have to be aware of as a hitter — and to be able to stay back and see the other stuff is just difficult. His cutter was good and he threw some great splits.”

The Twins bats gave Sox pitcher Kyle Hart a warm welcome in the bottom of the third, as outfielder Gilberto Celestino led off the inning with a solo home run.

Cruz would step to the plate three batters later with a man on and walloped a pitch into the right-centerfield stands.

The Red Sox would tack one on in the ninth, but that was all they could muster.

With the win, the Twins take the first game of the “Chairman’s Cup” (formerly the Mayors Cup).

While Red Sox fans are still up in arms about the deal that sent one of, if not the best all-around player in baseball packing, the team is ready to continue along without two major pieces.

The Red Sox have a plethora of offensive talent that includes J.D. Martinez, Xander Bogaerts, Benintendi, Rafael Devers — who had a break-out year last season — and Alex Verdugo, who Boston got back from L.A. as part of the Betts/Price deal.

“Yeah, of course,” Eovaldi said when asked if he thinks the team still has a high talent level to be successful. “Don’t get me wrong, Betts is an awesome player, awesome to have out there, awesome teammate, but I mean we have other guys who are going to be able to step up. They might not be able to do what he did right away, but we have a lot of guys who are going to be able to fill in his (Betts) spot and help the team out.”

Martinez was asked about the departure of Betts.

“He’s obviously a big bat, a big player, but it’s one of those things where you’ve got to turn the page almost,” Martinez said. “We’ve got a lot of good guys on this team, a lot of really good players. It wasn’t just a one-man team. We have a lot of really good hitters and a lot of guys that can play. I’m excited for players to continue to grow and continue to develop in their careers.”

Martinez himself said he’s changed some things up heading into this season, one of them being his diet. He said he’s eating more greens and working on staying a little leaner.

“I feel better. I feel that my joints aren’t as achy as they were in the past. I’m excited about it,” Martinez said.

With Price gone as well, the starting rotation is the biggest need for the Sox, as ace Chris Sale’s spring has been muddied with pneumonia and he is hopeful to make progress and continue to ramp up his bullpen sessions. This spring will serve as a proving group for the potential fifth man in the Boston rotation.

“I feel like we’ve got the guys we need to compete,” Eovaldi said of the rotation. “We have a job to do out there on the mound. We have four guys now (and) looking for that fifth spot. We’ve got a lot of time left in Spring Training and a lot of guys competing for it.”

Benny back to leadoff

Benintendi has been moved back into the leadoff spot this season after previous attempts to get the lefty into the top place in the order were met with cold results. With Betts gone, Roenicke is looking to “Benny” to be the catalyst of an offense with the chops to still make life rough on opposing pitchers.

“I think last year he was searching a lot,” Roenicke said. “He kept tinkering with stuff, and he should. He just really never found what he wanted. I know he’s pretty happy where he is right now. Hopefully that continues into the season and we have that player that we know he is.”

The new skipper, who is at the helm after former manager Alex Cora was let go due to his involvement in the 2017 Houston Astros sign-stealing scandal, said the mental side of the game is what has hindered Benintendi’s performance in the leadoff spot.

“It’s easy for me to tell him, ‘Hey, you’ve just got to clear your mind.’ But how do you do that?” Roenicke said.

His advice is to keep it simple when you’re struggling, to just try and square up the ball. That when you’re performing your best, you can sometimes try to complicate things by over-thinking.

Benintendi’s leadoff home run in Monday’s game is what Boston hopes is a sign of things to come.

The recreational harvest of greater amberjack will reopen in Gulf state and federal waters Aug. 1. This season ...