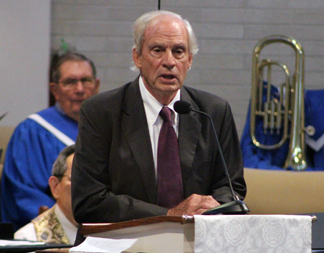 A few months ago, when Lee County Commissioner Frank Mann learned he had terminal pancreatic cancer, he went to the new pastor at Covenant Presbyterian Church in Fort Myers, Bill Teng, and said that he would record a video message at the church to his friends and colleagues as a way of saying goodbye.

So it was on Saturday, when friends and many county leaders came to say goodbye to Mann at his Service of Witness to the Resurrection on Saturday, they had a chance to see and hear Mann one more time.

Mann started with a Yogi-ism, remembering what a friend used to tell him, “If you don’t go to other people’s funerals, they won’t come to yours,” as those in the church laughed, promising he would come to their funerals, albeit in spirit.

Mostly, he talked about the songs and hymns he loved and what made them so special and finished by talking about his wife Mary, whom he called “the wind beneath my wings.”

Mann was remembered as a public servant and environmentalist whose southern drawl and authenticity made him a dying breed in the political world, someone who didn’t see you as red or blue.

His fellow county commissioners marveled at his legacy, which started with his hand in desegregating schools in the late 1960s when he first ran for office on the school board, to his work to maintain the environmental standards in Lee County though Conservation 20/20 and other initiatives.

“He was always a leader in our community. No matter what the topic, we could have our differences we’d vote and afterward we’d hug and laugh about it,” Lee County Board of County Commissioners Chair Cecil Pendergrass said. “We both wanted the same thing for Lee County.”

“Frank Mann was an icon,” said District 1 Commissioner Kevin Ruane. “We worked with him for 16 years, 14 of them when I was mayor and councilman in Sanibel. We both helped preserve the environment and advocated for it. He was something special,” Ruane said. “Conservation will be his biggest legacy.”

Former CIA Director and Florida congressman Porter Goss, and former state representative J. Keith Arnold, spoke of Mann as many others did, as a down-home, plain-spoken Southerner who could fiercely debate you on an issue one moment and have a laugh with that same person the next.

Also speaking was Frank Mann Jr., who gave a long, but humorous story about the promise his father had made while a state representative where he said he would switch parties if the governor put his bill, which would ban the death penalty for mentally challenged people, up for a vote on the final day of legislation.

He finished with a quote from Thomas Jefferson, who said “one man with courage is a majority,” and what it meant to him in regards to his father.

“My father was the most courageous man I’ve ever known. I will be forever proud to be his son. Like all of you, I will miss him,” Mann said.

Mann was a lifelong resident of Lee County who began his career in public service in 1974 in the Florida House of Representatives, where he served eight years before moving on to the Florida Senate for four years. He served as Lee County’s District 5 commissioner for more than 15 years.

“The man was a legend in my book,” said Lee County Sheriff Carmine Marceno.

Mann was a lifelong resident of Lee County who began his career in public service in 1974 in the Florida House of Representatives, where he served eight years before moving on to the Florida Senate for four years. He served as Lee County’s District 5 commissioner for more than 15 years.

To the editor: It appears that a majority of voters expect the elections of 2022 and 2024 to bail out the country ...