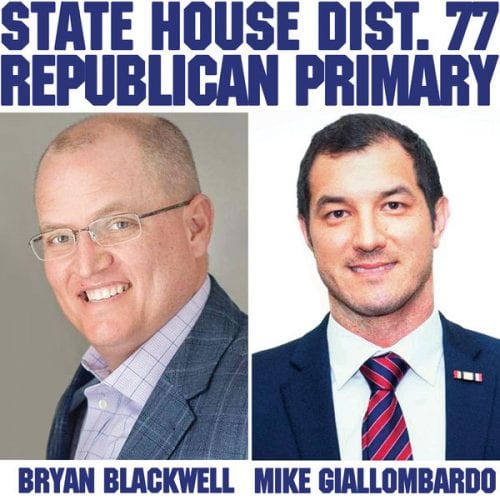 The District 77 State Representative race appears on both the Aug. 18 Primary and Nov. 3 General Election ballots.

The Republican primary has two candidates, financial advisor/Marine Corps veteran Bryan Blackwell and business owner/ Army veteran Mike Giallombardo. The top vote-getter will then advance to the General Election where he will face off against Democrat Joshua Lopez.

Here’s a look at this election’s candidates for Florida House of Representatives District 77, which includes Cape Coral. Dane Eagle currently holds this seat but is term-limited out and is running for Francis Rooney’s seat for U.S. Representative for Florida District 19.

Blackwell is a 30-year Lee County resident and is a financial advisor for Molloy Financial Group. This is his first time running for an elected position, though he is involved in many local organizations including being the current chair for the Greater Fort Myers Chamber of Commerce Board, past chair and current member of Big Brothers Big Sisters of the Sun Coast, member of the Cape Coral Community Foundation Board and member of the Cape Christian Fellowship Finance Committee. Blackwell served four years active duty with the United States Marine Corps, reaching the rank of sergeant. He received the Navy Commendation Medal, two Navy Marine Corps achievement medals and the Good Conduct Medal, as well as others. He also served three years in the reserves. Some of his positions include: pro-water, low taxes, small government, pro-life, pro-Second Amendment, pro-Donald Trump and anti-illegal immigration.

“My motivation to run for office stems from my desire to serve,” Blackwell said via email of why he is running. “I currently serve as Chairman of the Greater Fort Myers Chamber as well as a board member of the Cape Coral Community Foundation and Big Brothers Big Sisters. I have also served on numerous others boards and committees locally over the years in my quest to serve. I helped create the Member Advocacy Committee with in the Greater Fort Myers Chamber in order to better advocate for small businesses in Southwest Florida. I have spent extensive time in Tallahassee and Washington D.C. advocating for our community and the issues we face including water quality. I believe I have reached a ceiling in my ability to effectively serve this great community and that the legislature is the next step in continuing my service to our community and its great residents.”

Planks of his platform are “honor, courage and commitment.” Blackwell’s top three issues are: economic recovery from COVID-19, water quality and growth and infrastructure.

Blackwell is married to wife, Laurie with two teenage daughters.

Giallombardo is a business owner and combat veteran whose military roots run deep. His father, Robert, was stationed in South Korea with the Army’s 2nd Infantry Division when he met a Korean woman named Sun. When his deployment ended, Sun decided to leave South Korea and move stateside with Robert. Mike was born in the U.S. and grew up in Cape Coral where he attended Pelican Elementary, Gulf Middle and attended both Mariner and North Fort Myers high schools. He was a standout football player throughout high school, which ultimately led to college scholarships.

After graduating from Florida Atlantic University and earning a masters in international relations with a focus in conflict resolution from American Military University, he enlisted in the United States Army and was deployed to Iraq in support of Operation Iraqi Freedom. Giallombardo served with the 4th infantry division and supported special operations missions and earned numerous accommodations and medals that were awarded for operations that led to capturing various targets. He is currently the owner of Total Intelligence Group, a cyber security business. This is his first time running for office. Giallombardo also currently serves as a Warrant Officer in the Florida National Guard as a State Emergency Response Team liaison for the State of Florida. He has been activated for multiple hurricanes working with multiple counties in ensuring that the citizens have support from the Florida National Guard.

“I am running to represent the community I was raised in and have lived in my whole life,” he said via email. “After serving in the United States Army I have a sense of duty to give back to the community I am raising my children in.”

Planks of his platform include protecting the unborn, veterans and water quality. Giallombardo’s top three issues include rebuilding the economy and bringing jobs back to Southwest Florida, fighting illegal immigration and defending the Second Amendment rights. He is married to wife, Wendi, with two children while also helping raise their young niece.

Lopez is an attorney at Fort Myers Law Firm and has been a Lee County resident since 1992. He received his bachelor’s from the University of Florida and completed law school at Florida State University. This is his first time running for office. Lopez has been a member of the Cape Coral Democratic Club since 2018.

“The divisive rhetoric spouted by our national and state leaders is too much. Florida has had 20 years of one-party rule, resulting in a state government that only listens to special interests and is not interested in solving the problems Florida faces. I am running to provide a voice for all the people of my district and to provide solutions instead of the same talking points of the past 20 years,” Lopez said via email.

Planks of his platform include the environment, the economy, education, health care and change. His top three issues are climate change, water quality and health care.

Lopez is married to wife, Ashley, with one daughter.

Biographical information cited has been provided by the candidates. More complete bios for each candidate may also be found on this page and online.