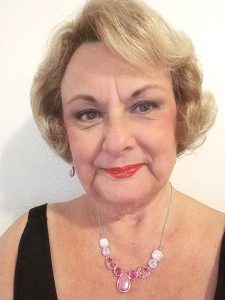 A booth, set up on Cape Coral Parkway to register more voters during a Cinco de Mayo event many years ago, re-sparked a love of dancing. That love eventually blossomed into one woman dedicating her time to help a Cape Coral dance chapter get off the ground — a big recognition for the effort.

Sharon Harrington, dance volunteer extraordinaire, began working with the Lee County Elections office in 1989 and in 2004 ran for Lee County Supervisor of Elections, a position she then held for 12 years.

The May following her election, Harrington had a booth set up during the Cinco de Mayo event, which attracted all kinds of vendors, one of which was Rhythm in Motion Dance Studio.

“When they play Latin music I don’t sit still,” she explained.

The owner of the studio danced with Harrington and later the returned to the Elections Office booth and asked Harrington is she wanted to be a part of the studio’s first Dancing with the Stars fundraiser for Make A Wish Foundation.

From there Harrington got to know the people at the studio, as well as visit other chapters.

“When they started one in the Cape, I got really involved,” she said of USA Dance Cape Coral Chapter No. 6123. “Dancing is a great hobby, good exercise and you meet a whole bunch of people.”

Due to her dedication to the chapter during its first year, Harrington was named the 2019 Volunteer of the Year.

Although she said there were a lot of other people who made the chapter’s first year a success, she is very honored to be selected as the Volunteer of the Year.

“I was extremely surprised,” she said of the award. “I didn’t think for a minute our chapter would be considered because it being the first year. It was very much a surprise, I was very honored and flattered.”

“She was very instrumental in preparing for our chapter to be chartered to begin dances and events in the Cape and surrounding areas,” Davis said in an email. “Her decorative and creativity is witnessed at each of our dances with her beautiful flower and table decorations. Our fundraisers provide our community with large financial donations with Sharon’s expertise. It is an honor to have Sharon become our first Volunteer for Cape Coral Chapter #6123.”

Harrington said when the Cape Coral chapter began they needed to have a board of directors, so she raised her hand.

“Since it was a young studio, whenever we had an event, I tried to do as much as I could,” she said.

That included setting the decorations for the tables, which had a different theme every month, as well as making sure the refreshments were set up.

Harrington became the secretary and began taking minutes and attending other events to encourage more individuals to join the chapter.

“I’m still on the board and am still the secretary,” she said.

In the chapter’s second year, Harrington said they hope to expand their membership. She said there may be a lot of people out there who might enjoy dancing.

“The hardest step you will ever take when you start learning to dance is the first step into the dance studio; after that it is amazing,” Harrington said. “Once you get in there it is a lot of fun.”

“As soon as we can open up and start dancing, we want everyone to get on the dance floor,” she said. “We would like to see that class get built up and be able to get some members participating during the week. We want to share the wealth, joy and the fun that we have. It’s a great sport, great exercise and you meet a lot of wonderful people.”

As far as when the classes will begin again, Harrington said it all depends on the city opening all its facilities, as well as the CDC guidelines.

“You can’t do social distancing when dancing. They don’t want to endanger anyone, or have anyone coming in that might be carrying it. They are being careful,” she said.