Lake Fairways women make mats for those who are homeless 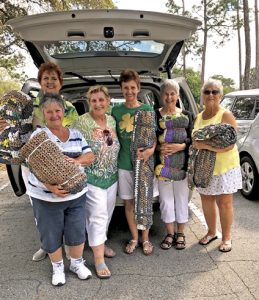 This past week, the women at Lake Fairways, a retirement community in North Fort Myers, tried to make things just a little bit better.

The women delivered 10 plastic sleeping mats that they crocheted to the Lee County Homeless Coalition last Tuesday, to be given to people to sleep on at local outreach centers.

Judy Carson, president of the Lake Fairways Ladies Club, said they have been collecting plastic bags for a year to do this project.

“Last year we were invited to the Homeless Coalition for an event where they handed our blankets to the homeless. We started donating blankets and we found a group who made homeless mats,” Carson said. “We decided we wanted to do that.”

The mats are made from approximately 750 plastic bags and crocheted together with yarn. Carson said it was a great way to get the bags out of the landfills and do good for those in need.

They would meet on Saturday morning, form teams, and have them flatten the bags, stack them and cut them into shape. More bags would be used to be made into a “yarn,” which would be rolled into balls and woven around the mat stuffing.

They are flexible, bugproof, lightweight, can repel water and portable enough to be carried around.

There are videos on YouTube that show you how to make one.

Carson said this is an ongoing project, with club members continuing to make the mats. It is very labor intensive. One mat can take a team all day to complete, not including the time it takes to make the plastic bags into yarn.

“We’re going to make as many as we can because they’re 6 feet long and 4 feet wide, about the length of an average man,” Carson said.

Carson said she would also like to make blankets out of wrappers next year.

Janet Bartos, executive director of the Lee County Homeless Coalition, said she was happy to get them, as were those who received them.

“It gets them off the ground, and if they get dirty, they can be hosed down. They keep them off the dirt,” Bartos said. “The homeless are very grateful for this, and there are other groups who give them as well.”