Taste of the Cape moves to new location 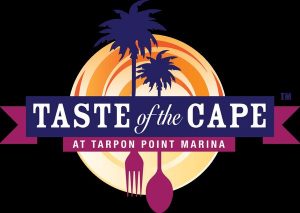 Taste of the Cape logo. Provided

Twenty-five restaurants will participate in the 7th annual Taste of the Cape, which this year will be held at a new venue this weekend.

“Taste of the Cape was created to become a marquee fundraiser to benefit the initiatives of the two host organizations,” BOOST Creative owner & Creative Director Matthew Connar said of the Chamber of Commerce of Cape Coral and Gulf Coast Symphony. “We moved Taste of the Cape to Tarpon Point Marina because we wanted to infuse a fresh dynamic into the event. It was time for a little change. Hosting the event at a beautiful location like Tarpon Point Marina also elevated the event.”

The VIP option is new this year, providing individuals with the opportunity to enjoy a private tent with tables, as well as servers. It also includes bathrooms, parking and stage-front seating for VIP passes.

Connar said some are returning restaurants and some are new this year.

“Some have been on hiatus, but have returned this year due to the new location,” he said. “Zirilli’s Chilly Treats has been with us every year.”

In addition to the event celebrating culinary arts, craft beers, wine and a signature Wicked Dolphin rum drink will be offered.

Taste of the Cape will also feature live music, including a Symphony at Sunset at 4:30 p.m. by the Gulf Coast Symphony, as well as original and cover songs by The Collective, acoustic solo artist Brian Markley and a jazz quintet Maci Miller and David O’Rourke.

New this year, is a family fun-zone.

“The family fun-zone was added to give children a designated place within the festival. The family fun zone includes the Musical Discover Zone, where children can touch and play a range of musical instruments. It also includes the City’s Cape Fun Mobile, which offers a range of recreational activities. Other activities include face painting, rock painting and a magician,” Connar said of the zone that is primarily for kindergarten through ninth graders.

Taste of the Cape also will feature approximately 50 craft and business vendors, Connar said, adding that most of the craft vendors come by way of the Cape Coral Farmers Market.

“The range of talent is impressive,” he said.

The event, which is supported by the Gunterberg Charitable Foundation, will benefit the Chamber of Commerce of Cape Coral’s Education Committee’s scholarship program and the Gulf Coast Symphony’s music education and community programs.

“The Chamber of Commerce of Cape Coral’s Education Committee utilizes their half of the proceeds to host Excellence in Education,” Connar said. Excellence in Education is an annual event that acknowledges one student and one educator of each Cape Coral school, elementary through high school. “TOC also provides a scholarship to one deserving senior at each Cape Coral high school. The Gulf Coast Symphony utilizes their half of the proceeds for music outreach programs throughout the community.”

Connar said that Taste of the Cape is a 100 percent charity event which is put on by a small group of members from the Chamber of Commerce of Cape Coral’s Education Committee and the Gulf Coast Symphony.

“Hundreds of hours of volunteer work are put into this event,” he said.