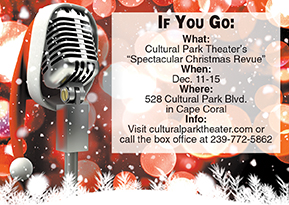 What better way to get into the holiday mood by taking in the local theater’s annual ode to Christmas?

The original revue, written each year by Cultural Park Theater Executive Director Michael Moran, this surrounds the story of a woman and her three children celebrating Christmas with their extended church family and town, who surround the family with joyous love and support while they miss their father and husband who is stationed overseas.

“The story ties the show into a wonderful time line of events but the bow on top of this package is the music and fun for everyone,” Moran said. “And, of course, the show wouldn’t be complete without Santa himself.”

This is the eighth season Cultural Park has put on its Spectacular Christmas Revue, and it has become a favorite for those who not only come to see the show each year, but the performers as well.

“It’s very popular within the theater,” Moran said. “This year, we had a record number of 57 auditioners for the show and wish we could have cast all of them but our stage isn’t that large. The ‘Spectacular Christmas Revue’ has long been one of the most popular shows of the season, not just in Cape Coral, but in Lee County as well. It’s filled with lots of Christmas music, pop music and a little Broadway — with a dazzling set and cast of performers that brings it to life.”

Moran said those in attendance can expect the fun, heartwarming music of the season.

“Our goal is to lighten the hearts and bring out the smiles of everyone in the audience,” Moran said. “The show is totally appropriate for all ages.”

“We wish everyone a very Merry Christmas,” Moran said. “The ‘Spectacular Christmas Revue’ was crafted specifically to celebrate the holidays and to celebrate everything that is Cultural Park Theater, that being our families, friends, patrons, sponsors and volunteers that keep Cultural Park one of the very best entertainment venues in the area.”

The theater also will present “An Evening of Christmas Cheer” featuring Michael D’Amore on Thursday, Dec. 19, at 8 p.m.