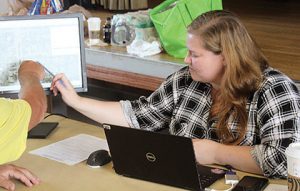 Jaime Tyson, of AECOM, points to the map for an area resident during an FIRM open house at the Cape Coral Yacht Club on Tuesday.

Some Lee County residents could be facing a large jump in their flood insurance rates and, this week, they could see for themselves why.

Property owners had a chance to look at the preliminary Flood Insurance Rate Maps at one of three public open houses, with one being at the Cape Coral Yacht Club on Tuesday.

The preliminary maps, developed through a partnership between area communities and the Federal Emergency Management Agency, show the potential extent and risks of flooding and are used by various entities, including insurance companies, financial institutions and government agencies, to determine such things as flood insurance premiums and building requirements.

These maps are the most up to date as they have ever been, with some data that was as much as 40 years old expunged and replaced with updated data, officials said.

Alvin Henderson, Emergency Management Division manager of Cape Coral, said the maps rate Lee County properties, which insurance companies use to determine premiums and if whether flood insurance is needed.

“They look at the information with the new technologies to determine if areas are more or less susceptible to floods,” Henderson said, adding the technological changes gives them a better understanding of the impacts of inundation from storm surge.

“That allows them to provide further detail on areas that need flood insurance or areas that once needed it to not need it anymore,” Henderson said.

Some of the homes built today are being raised several feet to reduce the possibility of flooding, meaning a newer house and the older house next door could have a different flood risk. That means the new maps could impact each property differently.

In North Fort Myers, a good part of the residents south of Bayshore Road live in a flood zone because of proximity to the river. Again, some homes that sit a little higher might not have to pay higher rates.

Also, some areas considered low risk for flooding may still experience it. Lehigh Acres was inundated when Hurricane Irma hit two years ago.

Interested property owners had a chance to see where their property stood. Billie Jacoby, who works for the Lee County Department of Community Development, said the map changes aren’t going to affect everyone.

“Some are entering into a flood area, others are coming out, base flood elevations are going up or down,” Jacoby said. “The maps show where the significant changes are. Those changes may not be as negatively affecting that home as you might think. It’s parcel by parcel.”

Wyatt Daltry, the city’s planning coordinator said for Cape Coral in general, it is becoming more vulnerable, but it’s not a huge percentage.

“The margins haven’t changed. If you were (in a certain zone) before, you may be out of the zone now because the margins have changed a little. But you have to look at the map,” Daltry said. “A ripple in the ground could affect a flood zone.”

Meetings were also held on Sanibel on Tuesday, and another was set for Wednesday at Florida Southwest University in Fort Myers.

Jim Zawacki came to see where his residence stood, and liked the results. However, he would remain vigilant.

“Nothing has changed on my property. I learned that even though I’m not in a flood zone, I will continue to keep flood insurance. It’s for peace of mind. You just never know. The storms seem to be growing with each year,” Zawacki said. “I’d rather be safe than sorry.”

Elizabeth Randall did not get good news. Her property changed into that of a potential flood zone. She said she now has some decisions to make.

The FEMA flood map can be found on the Lee County Government website on center of home page. The link is leegov.com .