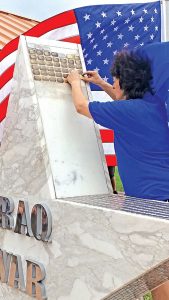 CHUCK BALLARO Michelle Rosenberger, chairperson of the Iraq War Monument, places a dog tag on the monument during a Memorial Day service at Eco Park on Monday.

In the history of this country, hundreds of thousands of Americans have given their lives to ensure our freedom.

On Monday, at the Iraq War Monument at Eco Park in Cape Coral, tribute was given to some of our more recent heroes in a special ceremony on a windy, muggy day.

The event featured a noon helicopter flyover by the Lee County Sheriff’s Office and Mosquito Control District as the flags were raised from half staff to full, the LCSO Honor Guard, the rousing rendition of the National Anthem from Cypress Lake High School’s A’Layahna Checo and a proclamation from Cape Coral Mayor Joe Coviello.

Michelle Rosenberger, chairperson of the Iraq War Monument, spoke of those who have been honored in the past, particularly those from the 507th Maintenance Company, 11 of whom were killed in a 2003 ambush, and those being honored Monday.

Those honored this Memorial Day were:

Rosenberger paid homage to Krause, a sports fan who cheered for the underdog and who got his GED so he could enlist in the Navy. He eventually was deployed from the Army Reserve and was killed in the Good Friday Ambush.

“He said he wanted to go to Iraq so someone else could stay home,” Sisco said.

Richard Hendrzak spoke of DiRaimundo, who he served with, and said this was a trying day for him, having been an Army medic for more than a decade, including two tours in Iraq.

“Today, we must not only mourn their loss, but celebrate their lives, trying to remember the joy they brought to us along with the tragedy,” Hendrzak said. “That’s very hard for me. They were whole people with whole lives and should be remembered as such.”

Hendrzak also spoke to those Gold Star families who have had to suffer with the loss of their loved ones through service while wondering what his father, who recently passed away, had to go through.

“You have bore the cost of freedom. The sacrifices made by your sons and daughters and carried by you is a lasting testament to the strength and will of the American people,” Hendrzak said.

Matt Doyle, who helped rescue Jessica Lynch, spoke of Lee. He said while he didn’t know him, they shared a bond as both served with the Army Rangers.

“We’ve both endured some of the toughest training. It’s a brotherhood of hardened warriors. We take on missions that others decline. To some, it’s a six-letter word. To those who endured, it’s forever. It’s a lifestyle you live every day.”

The fallen were given a 21-gun salute and Richard Osman performed “Taps” before friends and family affixed the gold dog tags on the monument to close out the event.

“Each year we gather to recognize somebody on the star of heroes on Memorial Day and Veterans Day. I along with this monument recognize and remember those who served, living and deceased veterans, in Iraq,” Rosenberger said.