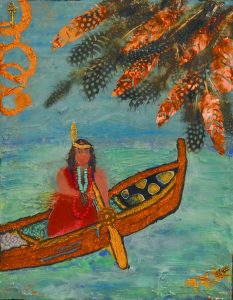 “One With Water” by MiMi Stirn was the selected event poster artwork.

Cape Coral is closely connected to the USA Canoe Kayak Sprint National Championships to be contested Aug. 2-5 in Clermont from the organizational side and the artistic side.

The theme for the art contest chosen by the USA Canoe Kayak organization is “Honoring the Roots of Our Sport.”

“My entry depicts a Native American woman in a canoe with gold interlocking (Olympic style) rings, gold feathers for the native headress and a lot of Southwest Florida color,” said Stirn. “I am a paddle boarder so the art really resonates with me. I was excited and elated that my work was chosen. It is specific to the sport, it is a part of me because of my interest in the sport.”

An artist all of her life, Stirn moved to Cape Coral in 2010 and became involved with Alliance for the Arts in Fort Myers, projects in Florida like the Artnado Art Fair in Palm Beach, and is a permanent artist with the Island Conclave Fine Art Gallery on Pine Island.

Her 11-by-14-inch resin artwork titled “One with water, one with nature” for the Sprint Nationals could fetch about $300 through a private outside sale. The posters will be sold at the event and Stirn’s original piece auctioned at the awards banquet to raise funds to support junior athletes traveling to the Olympic Hopes Regatta in Europe in September.

“It is amazing that we get to host this event,” said Mack. “I’ve been a race director in the past, so it’s nothing new. It’s been a year in the planning, starting with social media and a website last August after we were selected to host. It’ll be national exposure for us and for the business sponsors. We are looking for more sponsors.”

Mack expects 1,500 or more spectators to attend each of the four days of the Sprint Nationals.

“We expect 700 or more athletes competing from all over the U.S., Hawaii and Puerto Rico,” Mack said.