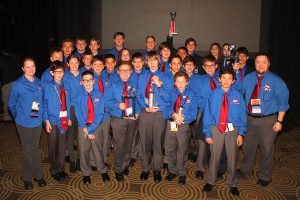 A combined team of Oasis Elementary and Oasis Middle represented Oasis Middle School and competed in 28 events from Wednesday, Feb. 24, through Saturday, Feb. 27. Of those 28 events, the team placed in the top ten in the state in 19 of those events.

Students from the city of Cape Coral’s charter Oasis elementary and middle schools brought home a wealth of awards in a recent state technology competition.

Out of those events, they placed in the top 3 (and trophied) in 4. The trophies earned were: Geospatial-1st Place Tech Bowl Written- 2nd place Prepared speech- 3rd place

This is only the second year that Oasis has a chapter and they finished the weekend being ranked seventh overall in the state out of 35 in attendance. They competed against chapters who have more than twice the enrollment as Oasis, have been an affiliated chapter for over 10 years and have been ranked in the top three in the NATION.

The following students were in attendance at the competition; Parker Bloch Alexander Brea Diego Diecidue

The following students are chapter members but were unable to attend the competition; Bryce Williams Veronica Velasquez Kourash Ghourbanian

The chapter is lead by co-advisor Adam and Anne Nowicki.