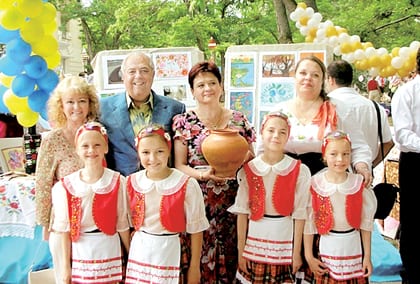 Photo provided Carol and Phil Arnold (on the left) join the 225th anniversary of Sevastopol School 43 during their two-year stay in Ukraine while in the Peace Corps. Also pictured are Principal Galina Alexandrov-na and computer teacher Alla.

A few Cape Coral residents reflected upon their memories of when they volunteered in the Peace Corps recently in celebration of the organization’s 50th anniversary this month.

There are currently 8,655 Peace Corps volunteers in 77 countries, seven percent of which are older than 50.

For two years, Patrice Koerper was in a reflective state of mind, so she could pinpoint some of the goals she wanted to accomplish. Those goals led her to research, which pointed her towards becoming a Peace Corps volunteer because she knew she wanted to serve her country at some level.

“I knew I wanted to do something different with my life,” Koerper said. “I wanted to touch the face of people I was helping. I had a distinct feeling that there were more people I wanted to know.”

In March 2006, she applied online to become a volunteer at the age of 53 and in late September she was accepted. She was flown to Philadelphia to go through a stagging process for a few days so the volunteers could get to know one another before they flew over to their assigned country. Once she arrived, she lived with a Macedonia family for three months before moving into a place by herself. 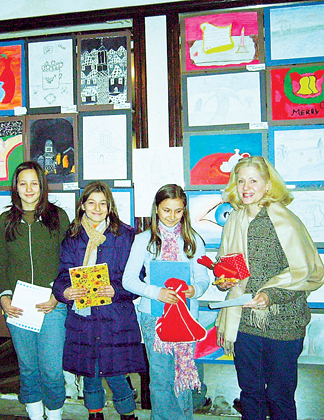 Photo provided Patrice Koerper stands with students who participated in an art project she held in Veles, Macedonia, during her three-year stay as a Peace Corps volunteer in Bitola.

She worked and lived in Bitola as a business developer of the municipality, which is Macedonia’s second largest city 10 miles north of Greece.

Once they retired, Carol and Phil Arnold also decided to join the Peace Corps due to an interest they had when they were younger.

Phil explained that since their passion has always been traveling and seeing different cultures, it only made sense for both of them to fill out an application to become volunteers.

The couple submitted their online application in September 2005 and left for Ukraine in October 2006, when Carol was 60 years old and Phil was 56.

Phil said Ukraine has the largest number of volunteers in the Peace Corps with more than 400 individuals.

Koerper agreed to a 27-month assignment in Macedonia for the Peace Corps and decided to extend her stay, so she could stay for a total of three years.

Her second grandchild was on the way, so she decided to come back to the states because her first grandchild was born while she was in the Peace Corps.

In order for the volunteers to interact with others in their host country, the Peace Corps teaches them the native language of their country for 12 weeks.

Phil explained that he and his wife studied Russian the entire time they were in Ukraine, so they could learn the language to teach children at two different schools from 2006 to 2008.

Carol said the Peace Corps was the hardest thing she has ever done, adding that her first year in Ukraine was very stressful for her due to the language barrier.

She explained that they have an Anglo program in Ukraine schools, but the native teachers are not speaking English correctly. So in addition to teaching the children, Phil and Carol also did teacher training. Students attend school from first through 11th grade in the Ukraine.

Phil explained that he taught the same classes for three school years while he was in Ukraine. He said they will travel back to Ukraine to watch his students graduate because of the elaborate ceremony.

“We have been back every year since we left,” Phil said, adding that he has been to a total of three graduation ceremonies.

During the summer the couple did projects, so they could understand the community better and get to know their neighbors.

Carol said they utilized a park that was behind their residence, so the kids could gather and watch a movie.

Carol said she enjoyed the movie in the park because it gave her the opportunity to “get to know neighbors and have the kids get to know us.”

Koerper also worked on many projects during her stay, one of which was an art project for 12, 13 and 14-year-olds. She explained that the kids did projects of what they saw of their town and what it meant to them, due to their area being heavily polluted.

Phil said he enjoyed his time with the Peace Corps because of the kids he taught and the friends he made in Ukraine.

“The kids are so honest,” Carol said about the 6th and 9th grade students she taught. “They tell it right out.”

Koerper said joining the Peace Corps is the best way to let go because she had no control over what was done.

“The Peace Corps is like summer camp for adults,” she said, but way longer with bigger challenges. “Every day is always an adventure if you let it be.”

Phil said his motto while in the Ukraine, was to “just say yes because you never knew what kind of excitement you would have” that day.

“It was the high point of my life,” he said about volunteering for the Peace Corps.

Photo provided Patrice Koerper stands with students who participated in an art project she held in Veles, Macedonia, during her three-year stay as a Peace Corps volunteer in Bitola.