At Wolf Creek Collective, the kids run the show

Photo provided At Wolf Creek Collective, kids learn every aspect of a show — including casting.

PHOTO PROVIDED Eden Fautz, director of “The Legend of Mulan,” stars as Scar at “Camp Create.”

Photo provided At Wolf Creek Collective, kids learn every aspect of a show -- including casting.

A new theater program designed to give kids the reigns when it comes to all aspects of planning, creating and presenting a show has come to Cape Coral.

Wolf Creek Collective, spearheaded in the Cape by Bridey Kearns, allows the students to use their imaginative and creative ideas to perform, direct, choreograph, write and influence an on-stage production. Kearns has been choreographing shows at Cultural Park Theater since 2017.

“Wolf Creek Collective is a collaborative theater program,” Kearns said. “A lot of children’s theater is just theater where the adults tell the children what to do and they do it. We are different from most theater programs in this area, in that our shows are run entirely by children with supervision and guidance.”

Wolf Creek Collaborative is putting on its first show, “The Legend of Mulan,” this November and will hold auditions this Sunday at 10 a.m. It’s second show, “The Velveteen Rabbit,” will take place in December with auditions being held on Sept. 25.

For each show, Kearns and her team go through applications of students ages 12-18 who hope to apprentice in one of three distinct areas: writing, directing or choreographing.

After their student creative team is found, there are auditions, like any typical show, except the students will be the ones selecting the cast after going through a casting workshop with adult theater professionals. The student director and choreographer will then work with their cast at rehearsals to put on a full-length production that has been edited and workshopped by the student writer.

All students in the cast have the opportunity to participate in set design, props or costume crew for that show as well. Kearns said a team of dedicated adults will create anything the kids can dream up. In the end, the entire show is made from the imaginations of the kids who are putting it on.

“That opportunity is almost never around for children and especially not children under high school age,” Kearns said.

Kearns said the program hits home for her, as she always loved the dancing aspect of theater but was never the “best singer.” After high school Kearns actually stepped away from the theater with the mindset that students at the college level would all be talented singers. To her, and unfortunately many others, her mindset was just being an exceptional dance talent wasn’t enough. With this program, Kearns wants to show the youth that they can make a difference in all aspects of the theater. even if you’re not the “star of the show.”

“Kids who don’t necessarily have that ‘amazing singing voice’ or all of the dance skill or the memory kind of get left behind,” Kearns said. “They just get thrown into ensemble roles when they might have more to bring to the theater that has not been explored yet.”

PHOTO PROVIDED Eden Fautz, director of “The Legend of Mulan,” stars as Scar at “Camp Create.”

Kearns said when she came to Cultural Park Theater to choreograph a friend’s show she realized she could make a major impact on a production without being front and center. It is now her passion once again. She and her team want to help youth realize all aspects of contribution to the theater at a young age before they lose interest in their passion.

“I had a large gap where theater sort of died for me, and so one of the goals of Wolf Creek Collective is showing kids, ‘Hey, there are things that are going on in the theater you can be involved in even if you don’t want to be an actor or an actress,'” Kearns said. “There are other things that you can do.”

At Wolf Creek Collective, kids can be part of the production or just be part of a crew that takes care of an aspect of the show that doesn’t involve the stage such as set design or props or costume design — even both.

“I’m hoping by encouraging this and fostering it at a young age, that the kids will be able to realize that there are these opportunities out there for them,” Kearns said. “Our theater world in this community can be more creative and diverse because there are more people out there bringing their talents to the table.”

“The Legend of Mulan” will be directed by 11-year-old Eden Fautz and choreographed by 12-year-old Emily Salazar.

Fautz, who Kearns said wants to be a film director, on her application said, “I hope to learn what being a director is all about. How it is to work behind the scenes and create those scenes.”

Salazar, who Kearns even said was an inspiration for wanting to bring the program to Cape Coral, on her application said, “Dance is my passion because I can express how I feel depending on the song. Dance is my happy place. I also love being around people who have the same passion as me. I want to be part of a magical experience.”

While current productions will be of familiar titles that give students the opportunity to edit content and have creative control of a known storyline, Kearns has plans for a team of students to create their own production from scratch, using just what they envision in their minds.

Wolf Creek Collective also has openings for its extended summer program called “Camp Create” where kids do elaborate scenes from familiar shows, all under their control.

Wolf Creek was created by Kearns and her three friends who all love theater. They are from Grove City, Pennsylvania, where a natural spring named Wolf Creek runs directly through the community. One of her friends spent time working with a professional company before COVID-19 hit and she lost her job. When she returned, the group used some of what she had learned and incorporated it into their own program, which Kearns is now implementing in Southwest Florida. 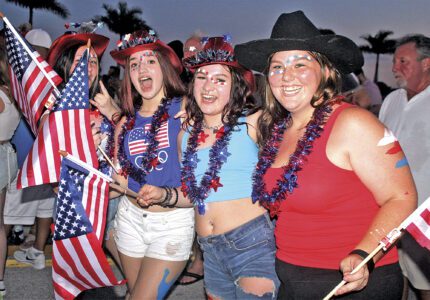 The Edison and Ford Winter Estates will be open 9 a.m. to 5:30 p.m. on Independence Day, Thomas Edison's favorite ...