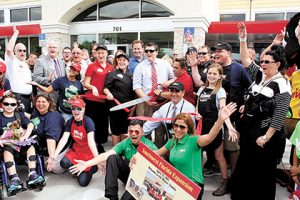 Cars parked along the side of Old Pondella Road and around the corner.

Inside, hundreds of people were crammed as they waited for their signature hoagies and other items.

This was the scene at the corner of Pine Island Road and Del Prado Boulevard (and at two other locations in Fort Myers) on Thursday as Wawa held its grand opening celebration, the last of three held by the popular convenience store.

For many, especially those who lived in the Philadelphia area years ago, it was like going home again. For others, it was something they had heard about from a friend and thought they would give it a try.

Brittani DiPaolo, event specialist at Wawa who came from Pennsylvania headquarters, was amazed by the turnout, which was pretty much standing room only since the Cape store’s 8 a.m. soft opening.

“It’s fantastic to see the community open up to us. We’re so excited to be here finally,” DiPaolo said. “The excitement has been building and today people are happy to have us.”

“I heard it would be crazy, but never like this. But I wouldn’t want it any other way,” said general manager John Gardner. “It’s a great opportunity for our associates and customers to see what our values are.”

The event was more than two years in the making. Numerous local dignitaries came for the event including County Commissioner Brian Hamman.

Gov. Rick Scott came to Fort Myers to cut the ribbon on the Fort Myers location on Colonial Boulevard early in the morning.

The Cape event featured T-shirt, car charger and clapper giveaways, the Mariner High School marching band, a ribbon cutting, and a Hoagies for Heroes competition between two local charities picked out by the police and fire departments.

“I have heard so many good things about Wawa. I had my first experience this afternoon. It’s great to see a company come to Lee County and expand. But when three come on the same day and bring in 120 jobs, it’s something to celebrate,” Hamman said.

The Muscular Dystrophy Association and the Drug Free Coalition of Southwest Florida competed to see who could build the most hoagies in three minutes, when they weren’t throwing lettuce at each other. Each earned $1,000 for their efforts.

The Harry Chapin Food Bank was also a big winner, receiving $15,000 ($5,000 for each new store) from Wawa to help feed the hungry in Lee County.

“They have delicious foods, great salads, soups. If you’re hungry and can’t find something at Wawa, you’re not hungry,” Allender said. “There are about 300 people from New Jersey here today from all walks of life and it’s wonderful.”

“We had marked our calendar to be here. We were here when it opened and had breakfast, and we’re thrilled to have these people here,” said Jandy McCoy, from “Exit 0” in New Jersey, now a 40-year Florida resident. “They do a lot of community stuff and it’s a great place.”

Kathy Leitsch, originally from Wawa, Pa. and now from Punta Gorda, remembered living down the street from corporate headquarters.

“Wawa bought my Pennsylvania house. They are expanding so much and providing so many jobs in the Philadelphia area,” Leitsch said.

Wawa, which has 65 locations and more than 2,500 associates in Florida since opening stores here just over two years ago, will bring 120 jobs to the three stores it opened locally. Wawa plans to have 12 stores locally by the end of 2017.

For company CEO Chris Gheysens, the day was a blur. but well worth it.

“I’m overjoyed. the reception from Cape Coral has been fantastic. This is the easy part. Doing the planning and construction is the hard part,” Gheysens said. “I’m humbled. The love affair with the brand is something we cherish.”