From left, artists Mandy McMahon, Angela Delaplane and Jessie Delaplane by the walls they painted in tribute to noted Pine Island artist Mel Meo, who recently passed away. Photo provided by Luke Long

It seems the wall on Stringfellow Road that reads (in honor of deceased artist and islander Mel Meo), “Live and Let Fish,” has a new addition — “Eat More Mullet.”

Eat more mullet was not only a phrase coined by Meo, but, according to Meo’s son, Luke Long, is an apparel company and also a brand that preserves history through expression and enriches the community.

“The wall is the perfect way to honor my mom and brighten the days of islanders. The detail, in not only design, but also in the color selection, which puts so much of her life on display for us to always remember her. I couldn’t be more proud of the final product and I know she would be, too,” Long said.

Painters Amanda McMahon and Angie and Jessie Delaplane say Meo had a lot of pride in her community, which was reflected in her artwork.

“She embodied the spirit of Pine Island and had a deep respect for the people who live here — the preservation of the island itself and those who earn a living putting food on people’s tables. This mural is a symbol of that same pride that we have as local islanders to honor Mel and the message she was trying to spread about our special little fishing village and its inhabitants. ‘Eat more mullet,’ ‘live and let fish,’ in our eyes, have multiple meanings — take care of those taking care of you, take care of your environment and it will provide for you, and also to live and let live — let those earning an honest living provide for their families – a message that resonates on a much larger scale today. Mel’s art was as bright and fun-loving as she was so we ‘Mel-ified’ it with some of her signature colors and her own artwork incorporated into the design. We hope the locals and all its newcomers enjoy it for years to come and continue to Eat More Mullet,” Angela Delaplane said. 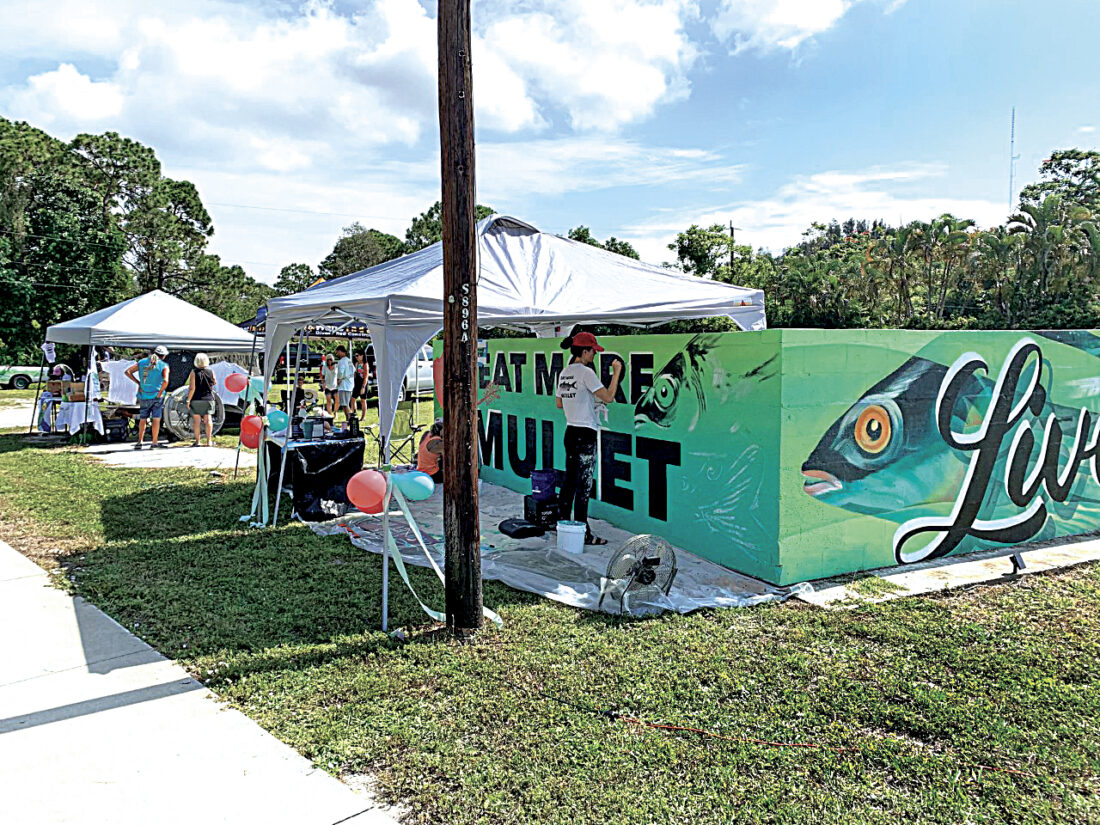 The team of artists working on the Eat More Mullet mural on Pine Island. The wall murals are a tribute to island artists Mel Meo, who recently passed away. Photo provided by Luke Long

Delaplane admitted it was very satisfying to learn during the process of painting the murals that one of Meo’s friends mentioned on social media that Meo herself had also wanted to paint that wall.

“She must have been making magic happen behind the scenes to make it all a reality,” Delaplane said.

McMahon explained that she felt a sense of obligation to honor a woman and fellow artist who had become so dear to her.

“With Mel’s passing, we felt compelled not only to honor her memory, but to carry on her message, as it carries more weight in its words today. To us, ‘Eat More Mullet’ is about community. It’s about being an islander, whether you grew up in a fishing family or not, whether you’re from the island or just moving here. It ties us all together through a special bond. It’s our roots,”McMahon said.

“The mural was painted in tribute and as a memorial for our fellow islander and artist. The imagery and quotes are all borrowed from or based on her artwork,” she continued. “Specifically, the famous phrase, ‘Eat More Mullet,’ was coined by Mel in 1992 and her son and family friend are carrying on her legacy with the apparel brand. Our hope, in painting the mural, is primarily to keep Mel’s memory alive for islanders old and new, but also, this is a way to support our friends in the next chapter of the Eat More Mullet story.”

Long said he and his businesses partner, Jen Erickson, have so much gratitude for the masterpiece (Angie and Jessie and Amanda) put together, in addition to being “completely blown away” by the love and support of the community who came out to support the Eat More Mullet brand while also getting to watch the finishing touches as they were placed on the wall.

To the community, Long said, “We couldn’t do this without you and hope you stay tuned to watch us grow.”

In regards to the apparel company, Long said, “It’s been around since 1992, we are just elevating it — something my mom always wanted us to do.

Founder and creator of Eat More Mullet, Meo wrote the following letter a month before her passing on April 20, 2022, to Long and Erickson as a reminder of where the brand started and how she envisioned it in moving forward:

“My fishing family coined the phrase ‘Eat More Mullet’ in the 1990s all while defending our small fishing communities around Florida’s coast. We had a primitive ‘Mullet Wagon’ that we hauled to festivals from Cape Sable to Tarpon Springs. You can really understand a culture by tasting their local food. We served a simple menu – Fresh Fried Mullet, Mel’s Famous Fritters, Smoked Mullet and Smoked Mullet Spread, a recipe passed down to me by a 5th generation fisherman. We educated and persuaded folks through our food, creating fans. In 1992, we put EAT MORE MULLET on a simple white pocket T-shirt and the rest is history.

“Sadly, today, the old timers, their simple lives, their colorful stories, history and recipes are now history. Present day 2022, we are preserving the EAT MORE MULLET brand with a new line of products. By supporting us, you help to keep the mission alive. We hope to educate folks about a culture of Florida fishing families and future generations.”

From left, artists Mandy McMahon, Angela Delaplane and Jessie Delaplane by the walls they painted in tribute to noted Pine Island artist Mel Meo, who recently passed away. Photo provided by Luke Long 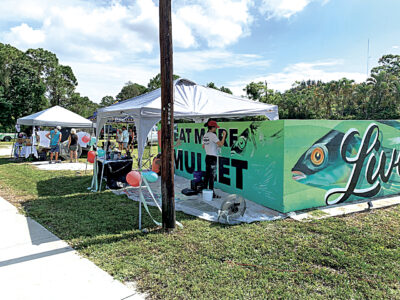 The team of artists working on the Eat More Mullet mural on Pine Island. The wall murals are a tribute to island artists Mel Meo, who recently passed away. Photo provided by Luke Long

This letter was Meo passing of the torch to Long and Erickson. Her excitement for the future of Eat More Mullet was prevalent. This was her passion and now has become her legacy, Long said.

Although the brand has been around for decades, it was only a small portion of Meo’s creative passions. Long and Erickson will now take the reins and build the business like Meo had always dreamt, along the way donating back to the Pine Island community that she loved so much. With a focus on scholarships to young local artists.