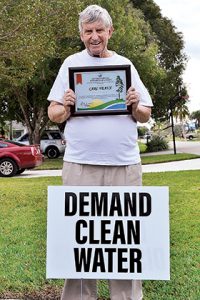 Carl Veaux with his environmental stewardship award from the Florida Department of Environmental Protection for his work on enhancing the region's environment. CJ?HADDAD

When you think environmental activist in Cape Coral, or Southwest Florida for that matter, one name comes to the forefront – Carl Veaux.

Veaux was honored at Monday’s Cape Coral City Council meeting, as he was presented an environmental stewardship award from the Florida Department of Environmental Protection for his work on enhancing the region’s environment.

His countless “letters to the editor” holding those in high positions accountable, and giving the “green” perspective on potential development, has garnered him the respect of environmentalist movements across Florida.

“I still don’t think I deserve it, but they thought I’d done enough to,” Veaux said in a lighthearted manner. “It did make me feel proud, yes. I started this because when I first moved down here, I’d see older people moving in and they’d put out a chair in their garage, and I said, ‘I’m not going to sit there and watch the world go by. I’m going to do something.'”

A lifelong teacher and member of the military, Veaux and wife Charlotte moved to Cape Coral in 1980, though his love of animals and the environment started out on his grandmother’s farm in rural New Jersey when he was a child.

“(My love) just came from being on the farm and seeing all the wild animals that would frequent it. We’d see fox and rabbits, of course. Raccoons, possums and skunks,” he said.

The memories he made on that farm would stick with him throughout his life, eventually turning into a passion that would make a difference for a community in Florida years later.

After he retired from teaching at Cape and Pelican Elementary in 1999-having hosted environmental conservation days when he was principal at a school in Idaho – Veaux turned his attention to preserving land, animals and became an advocate for environmental issues.

He joined groups such as the Sierra Club and Audubon of Southwest Florida, two top environmental groups in the area and nation.

He was twice president for Audubon, and served as treasurer for the Sierra Club.

The first major project Veaux contributed to was the preservation of the Babcock Ranch, helping form the Babcock Preservation Partnership, collecting over 16,000 signatures to help save the property.

He even presented their recommendations to former Florida governor Jeb Bush as part of three trips he made to Tallahassee.

Though they were not successful in preserving all of the land, 76,500 of the 92,000 acres were bought by the state and preserved.

Veaux received an award for his efforts.

“We had hundreds of people out with T-shirts to help save the land,” he recalled.

His other efforts with the Sierra Club included the halting of plans for a mine and foiling plans for a bombing range at Fisheating Creek.

During his time with Audubon, in which Veaux is still a board member, he assisted with the fertilizer ordinance, spoke out about water pollution-including the need for a reservoir south of Lake Okeechobee, which is now primed to break ground this year, and attempted to stop development of the Density Reduction Groundwater Recharge area of Lee County.

He was also an integral part of getting a 2014 amendment on the ballot that was to collect money from real estate transactions for conservation.

The initiative said that 33 percent of the money collected from the existing excise tax for required documentary stamps would be allocated for green spaces and virtually all environmental projects from beach re-nourishment to springs.

The amendment passed by a comfortable 74 percent majority.

He received two awards for his efforts, one from the Florida Wildlife Federation and one from Audubon.

He also worked against the development of the Sans Souci site in 2010, with the help of The Charlotte Harbor Estuary Conservation Group.

Another petition Veaux spearheaded was one asking the city to purchase the old golf course acreage off Palm Tree Boulevard in Cape Coral.

With help, he collected more than 10,500 signatures to save the 175-acre land from development.

The city decided to buy the property, and Veaux hopes to get the area cleaned up with federal dollars in the coming years.

He is now in his second year as president of the Cape Coral Friends of Wildlife, in which he was a charter member.

Their mission is to protect native species of the city, namely the burrowing owl, a threatened species.

“The other big thing is we’re trying to steer the city to build an environmental center, probably in Sirenia Vista Park.”

The environmental center is roughly a $2 million dollar project, he said.

Ironically and perfectly enough, at the same council meeting at which Veaux was honored, the city passed a burrowing owl protection ordinance, tightening restrictions of development on land on which Cape Coral’s official bird since 2005, nests.

The burrowing owl will now be protected under the Federal Migratory Bird Treaty Act.

A passion project for the 80-year-old Veaux is to spread the word of global warming, as he fears the climate change will do a number on wildlife-more than it already has.

“Stopping global warming is my biggest passion right now because we’ve lost 60 percent of the animal kingdom from 1970-2014-there’s a group that studies the populations, and we’re in severe extinction mode for the animals, and that gets to me. It’s happening,” said Veaux.

He will be speaking on Jan. 15 to Lee County’s legislative delegation about global warming and the upcoming state-wide septic tank and fertilizer bills.

This past summer’s toxic algal blooms and red tide events sent shockwaves throughout Florida waters, and Veaux was a constant presence at meetings across the region, even working with the Everglades Coalition.

“I’ve been working the last 10 years on this,” he said. “It killed 1,400 sea turtles, numerous dolphin, and a record number of manatee in Lee County.”

Though this past summer was a rough one for Florida’s environment, Veaux calls the current City Council the “greenest he’s seen.”

So why does he believe it’s important now, more than ever, that legislators and law makers have a green mindset?

His goal for Cape Coral’s future?

“That we preserve and protect the wildlife that is here,” he said.

He hopes the future is full of burrowing owls, gopher tortoises, eagles, scrub-jays, panthers, and all of the indigenous species of Cape Coral and the state of Florida.

For more information on the Cape Coral Friends of Wildlife, as well as membership details, visit www.ccfriendsofwildlife.org.