Hanging up the white jacket 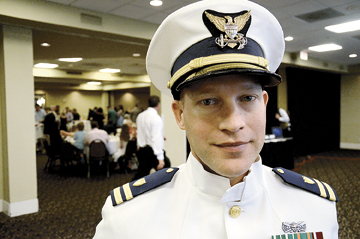 U.S. Coast Guard Lt. Spencer Roach said one of the most important lessons he learned during his 20 years and 16 days of service was how to be a good dishwasher.

When he first joined the Coast Guard, the Louisiana native, now Cape Coral resident, was assigned to what he called a “hardship tour” off the coast of Washington and Alaska, and his job was to wash dishes, clean up the kitchen and iron his officers’ clothes.

Some peers chose not to do their best at these tasks, believing ironing and washing to be beneath them. But Roach resolved to work hard at every task he was assigned.

“Work ethic doesn’t change with a promotion,” he said during his retirement ceremony, held July 15 at DiamondHead Beach Resort. 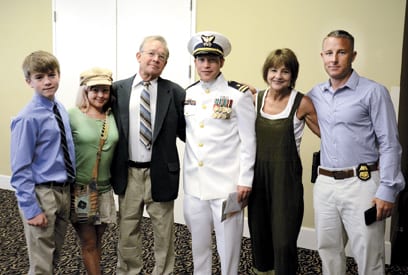 It was fitting for the ceremony to be held in Fort Myers Beach; his second assignment was with the Coast Guard Station on the beach, during which time he earned his undergraduate degree in political science from Florida Gulf Coast University. After, he got his Juris Doctorate from the University of Miami School of Law and served, until his retirement, as the senior attorney in the Office of Member Advocacy in Washington, D.C. His job was to defend disabled servicemen and women from the very government they served.

It was a position that fulfilled his lifelong dream, one he’d had since he was a child: to be a superhero.

Lt. Dan Fritz, who served alongside him in D.C., traveled to attend the ceremony and spoke about Roach’s role as a champion of the wounded warriors.

Military men and women often have a dream that when they are wounded and downtrodden, when they can’t carry themselves any further, someone will rescue them and pull them back up – a dream that often isn’t a reality, Fritz said. But Roach was that someone, when the government began to treat them as a liability rather than an asset. In two years, he represented 148 disabled service members.

Roach moved to Cape Coral in 2000 but has spent the last two years in D.C. He’s ready to get back to what he now considers home.

“I fell in love with south Florida,” he said. “I want to come back here and live happily ever after.”

His family – important pillars in his life – didn’t let him go. His parents, Lal and Wendy and his sister Breezy and her son Austin, all live in Cape Coral now. His brother, Beau, lives in Puerto Rico, working for boarder patrol.

“We’re very proud of him. He’s always been very independent… he did it all himself,” said Lal Roach, Spencer’s father, who admitted to getting emotional during the ceremony.

Lt. Roach, 38, is planning to take some time off from the workforce, travel and spend time with his family after years of dedication to his career.

During his speech, he said he was happy to see many “movers and shakers” of Lee County in attendance – including a former mayor of Cape Coral, the Lee County Sheriff, and Florida State Representative Ray Rodriques – because after the ceremony, he’d be unemployed.