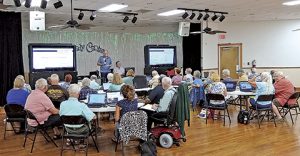 The Cape Coral Computer Club, comprised of “illiterates to geeks sharing information about all things digital,” is welcoming new members.

Cape Coral Computer Club President Gary Eidson said the club began 25 years ago when computers were starting to become a little more ordinary in the ’90s, as well as smart phones hitting the market.

“It was a much simpler time when a computer was a computer and a phone was a phone,” he said. “They had a very high attendance in those early days. It was something people wanted to have and it filled a need. We are living in an ever rapidly-changing world. There was a time the only way you started your car was with a crank. Today we can start cars in our living room by using our phone.”

The midday meeting mainly attracted retired senior citizens who were lacking in the skills they needed to keep up with what was going on in the technology world.

The Cape Coral Computer Club now has 29 meetings scheduled from October through May. The group meets from 2 to 4 p.m. on Wednesdays at the Lake Kennedy Center, 400 Santa Barbara Blvd. South, Cape Coral.

Every meeting includes a brief introduction, questions and answers for 15 to 20 minutes, as well as a short subject period.

Club members arrive around 1 p.m. to set everything up, which includes two 65-inch televisions and a microphone.

“The clarity of the TVs work very nicely,” he said.

Those who are interested in attending have an opportunity to try a meeting at no charge.

“If they choose to join, after the first of the year, we prorate their charge,” Eidson said.

It is $50 per family to join the club for 29 classes, which includes information uploaded to Sharepoint. Due to the club being a non-profit they are also a Microsoft Suite Platform vendor, which includes Word, Excel, PowerPoint and a terabyte of storage on the internet, for $3 a month.

Eidson said a member can spend as much as $86, which includes the $36 Microsoft Platform subscription.

“One of the advantages that we offer to people is even if they move they can still stay in the club because they have access to the reference library,” he said, adding that one day soon they hope to have live streamed presentations.

“We could live stream this and it would create history in doing that,” Eidson said.

There are currently more than 50 people in the Cape Coral Computer Club that range in age from their 50s to 91 years old.

Those who attend the meetings are asked to bring their laptops because “you best learn by doing.” There are power cords for the computers. He said although someone is teaching, they encourage everyone to get involved. One of those ways is by learning how to create a presentation on PowerPoint.

The club has created a curriculum for the Wednesday classes in a trimester approach.

“We try to cover a concept for a trimester,” he said. “This past week we talked about keyboard shortcuts, the F keys. At the same time we were also talking about virtual private networks under the broad topic of security,” Eidson said about passwords and how one can protect themselves on the computer. “What are the safe guards that you can use.”

Eidson said they have a list of more than 100 topics that are available, which they are surveying its members. Some other topics include Windows 10 basics, how to make a presentation, how to operate smart phones, audio visual manipulation and internet operations.

The Cape Coral Computer Club uses a platform called SharePoint, which is an internal Microsoft Program that is used to communicate internally and store their materials. He said they are putting the class material in a SharePoint site online to create a library of information for its members.

Eidson became involved in the Cape Coral Computer Club after he moved to the area in 2016. He said he happened to see a notation of the Computer Club at a church and was intrigued.

“There was a lot of good information and a lot of nice people,” Eidson said.

When the club began creating bylaws and revising their 501c3 in 2017, he shared some of his expertise and made some suggestions. Soon thereafter, he was asked to be the president of the club.

When he was nominated in 2017 and took the position Eidson began doing some major overhaul.

“It’s been an evolution ever since. We know it can be a lot more. It’s a nice feature, nice amenity to offer to Cape Coral residents,” he said.

The hope in the not so distant future is to begin a $250 to $500 scholarship for Cape Coral students. 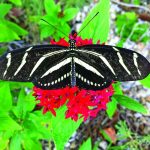 Garden Club’s March in the Park set for March 14

The Garden Club of Cape Coral is preparing for "March in the Park" a plant and garden art sale, their major ... 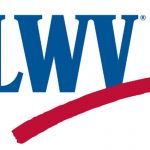